Rabia Khan finalized her PhD with a presentation of her thesis at the Department of Oral Biology June 29. 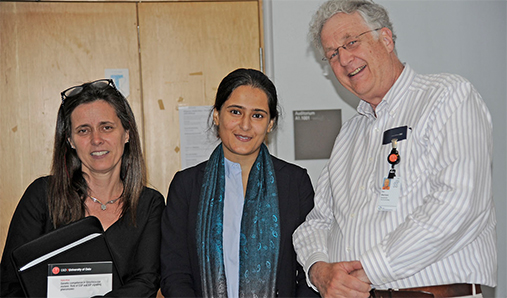 In her PhD-project Khan has studied how a certain type of bacteria, the Streptococcus mutans, communicate with each other via pheromones. Supervised by Professor Fernanda Cristina Petersen and Senior Research Scientist Gunnar Fimland, Khan’s work has, amongst other things, mapped a new pheromone called XIP. She has further investigated the connection between the XIP and another pheromone called CSP. The dissertation is titled:  «Genetic competence in Streptococcus mutans: Role of CSP and XIP signaling pheromones”. And the project is part of the CrossTalk research group at the Department of Oral Biology.

Significant for the research on resistance to antibiotics

The pheromones are significant to understand because they cause the bacteria’s absorption of genes: an essential part in the process of transmitting resistance to antibiotics. In her work Khan has mapped all of the genes of the Streptococcus Mutans-bacteria that may be influenced by the two pheromones. She made two main findings: CSP kills other bacteria while XIP takes DNA from other bacteria. In addition, she has detected extensive communication between the two pheromones. These findings are important scientific contributions in the search strategies to combat bacterial infections.

Was celebrated among colleagues and familiy

A good group of people had found their way to Khan’s presentation at Domus Odontologica. The candidate held her trial lecture earlier in the day: «Environmental triggers of genetic competence in bacteria: niche adaptation and evolution». The Pakistani ambassador to Norway, Mr. Abdul Hamid, was also present, throwing some extra lustre on the otherwise special occasion.

Making the celebration a new tradition

Following the defense of the PhD, the department had prepared an informal celebration. The beginning of a new tradition is a measure responding to the internal working environment survey carried out earlier this year. From now on, the department will facilitate a social event after PhD presentations and defenses. Family and colleagues had gathered around some snacks and a very happy and relieved Doctor: – My contract expires tomorrow, so I will go on vacation then. But I have applied for a postdoctor-project, so we’ll see what happens, said Khan.

The evaluation committee for the PhD dissertation consisted of researcher Rozenn Gardan from French National Institute for Agricultural Research, Postdoktor Vegard Eldholm from the Norwegian Institute of Public Health and Postdoktor Cecilie Morland from the Department of Oral Biology. The presentation and defense was lead by Professor Petter Lyngstadaas.