Roger Junges, Ph.d.-candidate at the Faculty of Dentistry (FOD), University of Oslo, was recognized with the prestigous «LION Dental Research Award for Young Investigators in Oral Health Research» at the International Association for Dental Resarch (IADR) General Session. 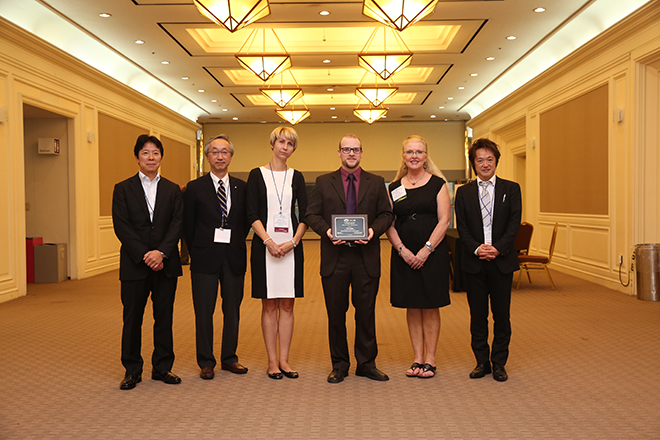 Roger Junges (in the middle) surrounded by representatives from the Lion Corporation and members of the committee for the oral health research. Photo: IADR.

The award is handed out annually at the General Session of the IADR to an internationally outstanding junior researcher within the oral health field. This year, Roger Junges, member of the Crosstalk-gruppa at the Department of Oral Biology was recognized as the recipient of the award.

The result of group effort

– It is a great honor to recieve this award. And it means a lot to me regarding my future work; it is definitely a great motivation in moving forward towards a future academic career after the Ph.d., explains Junges happily. He is scheduled to complete his Ph.d. and present his thesis next year.

The award is intended to «support improvements in oral health sciences through the stimulation of junior researchers».

Junges, also a dentist, is investigating the communication between bacteria and how it effects oral health in his Ph.d.-project.This far, his research group CrossTalk has developed a new strategy to genome editing on different species of oral streptococci. In addition, the group has discovered two new pheromone systems in bacteria.

– More than anything, this award is the result of group effort, Junges emphasizes. – This is a fantastic experience. To have our work recognized by peers means a lot to all of us. I think it is especially rewarding to work in a field of basic science that may open new avenues for fighting antimicrobial resistence. I'm also thankful to my colleagues collaborating with me, and to my supervisors.

Junges is being supervised by Professor Fernanda Petersen.

In addition to the award to young investigators, FOD could also be noticed through the efforts of Ph.d.-candidate Gabriela Salvadori, who belongs to the same research group as Junges. Salvadori represented Scandinavia in the Hatton Award Competition, after winning the 2015 NOF Hatton Award i Turkey last year.  She presented her work together with 58 other participants from all over the world at the IADR General Session, this year taking place in Seoul, South Korea.