On the 5th of February 2019, NO-Age (The Norwegian Centre on Healthy Aging) held its first symposium discussing ageing where dean of research Linda Hildegaard Bergersen joined forces with other scientists regarding the concept of aging. 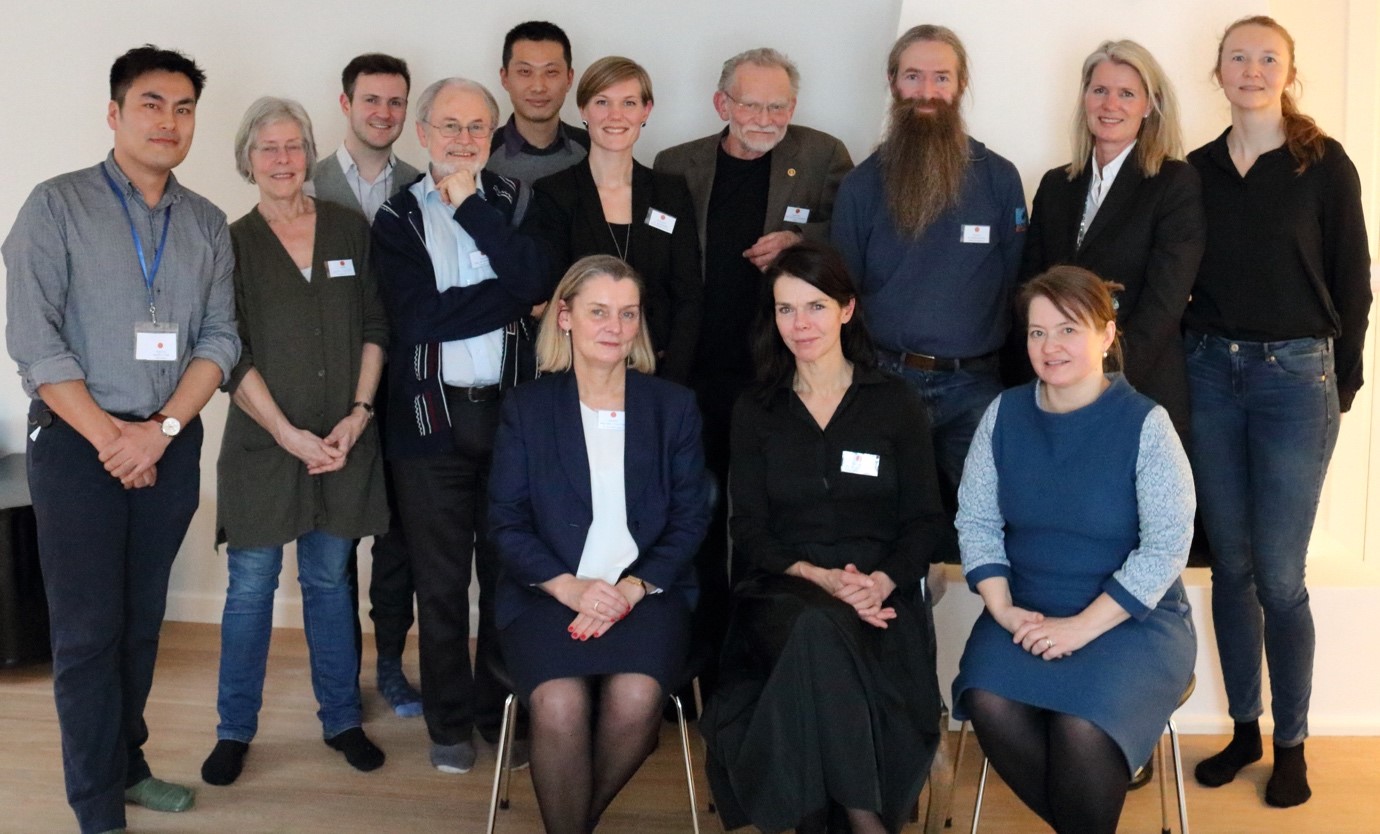 This symposium was composed of two sessions: the morning session in Domus Medica at the UiO focused on the latest developments in ageing research worldwide, while the evening session in Litteraturhuset created a unique platform for scientist and layman to discuss knowledge gaps in the field of healthy ageing.

The importance of healthy ageing as opposed to longevity in impaired health was a recurrent theme. Luckily, there were no complaints about the attendance, more about the lack of chairs.

Linda H. Bergersen kicked off the morning event by presenting the vision of the NO-Age network, a network connected to major anti-ageing research groups located all around the world. In this science-oriented session, in addition to the presentations by the four NO-Age founding members, leading researchers, including Anders M. Fjell (UiO), Lene J. Rasmussen (University of Copenhagen), Jan Hoeijmakers (Erasmus University Rotterdam), and Aubrey de Grey (SENS Research Foundation, California) shared with the audience their understandings of healthy ageing and the different ways to achieve it.

Both sessions were packed with over 140 attendees, largely local citizens, making free chairs scarce in the evening. The evening session opened with a speech by Pål Barkvoll, the Dean of Dentistry at UiO. On behalf of NO-Age, Evandro F. Fang introduced the concept of ‘healthy ageing’ and gave the audience a brief summary of anti-ageing research at UiO. The implications of longer and healthier lives were discussed in an evening panel debate led by Sigrid Bratlie.

From the minute we take a breath of air or step into the sun our cells start accumulating damage to the DNA, our genetic material. This can lead to diseases, such as cancer, and accelerated ageing.

Thus, we should be glad nature provided us with a toolbox to repair such damage. However, damage is not only caused by sunlight (or smoking, etc.), dangerous things are also produced in our bodies: like a running car produces exhaust, we too produce byproducts that are damaging to our bodies, like exhaust is to the environment.

Hilde L. Nilsen does research on DNA repair (base excision repair, for those interested) and how removal of this system in animals may lead to a healthier brain. You read correctly – removing the repair system may give better health! This might sound very wrong (unless you have had a previous encounter with a bad car mechanic). This system does its job well, and is in fact very important for maintaining our DNA. But as we age, it struggles to repair all damage accurately, leading to a piling up of wrongly repaired DNA, which is damaging.

The power of  calorie restriction

DNA damage repair proved to be a common topic. Jan Hoeijmakers’s eagerness to tell us all about his research was well noted by the fact that he went past his allotted speaking time. We are glad he kept going. Most intriguing was his research on accelerated ageing. This is a group of rare diseases where the symptoms of advanced age appear in the young. Following the discovery that calorie restriction increased the survival of mice afflicted with a type of accelerated ageing disease, a patient (Emma) was put onto a diet with 30% less calories than normal, and showed incredible improvement of symptoms and progress of development almost immediately. You can see more of this at Em’ Ma Vie

This sort of diet, often called fasting, is sometimes mentioned in magazines and news, and this research shows how fasting can ameliorate disease and increase quality of life. Luckily fasting and moderate calorie restriction have advantages beyond helping those who suffer from rare accelerated ageing disorders, and even includes benefits for healthy people, such as prolonging a healthy lifespan.

It is becoming more and more clear that there are many lifestyle changes that we can implement immediately, which can improve the way we age and can enable us to make the most of our lives.

Of course, if fasting doesn't suit your lifestyle, there are alternatives.

Ever trained so hard to the point where your muscles are screaming? In other words: ever tried lactic acid? For many the ‘feeling’ of lactic acid can be quite uncomfortable, even painful. However, Linda H. Bergersen´s research shows that the lactic acid can improve brain health. It seems to help create more blood vessels in the part of the brain involved in the formation of memories, while also boosting the levels of a growth factor (VEGF) that supports brain function and the ability to ‘learn’. At the same time these new blood vessels help increase the stream of nutrients, together improving conditions for storing memories: almost like giving a RAM upgrade to your computer.

Similarly, Anders M. Fjell presented on cognitive exercise, showing that it can reverse or slow reduction in mental performance and brain cortex volume during ageing. So learning is not just important when we’re young - it’s also crucial for keeping our minds sharp as we age. Don’t worry, there’s no need to return to school, but it would be a good idea to take up a challenging hobby.

In addition to physical and mental exercise, maybe you’ve heard the word NAD+ circling around social media or in the odd Google search. NAD+ (nicotinamide adenine dinucleotide) is an important molecule found naturally in our bodies. Evandro F. Fang, in collaboration with Hilde L. Nilsen and Danish-American professor Vilhelm A. Bohr, has found there is a decrease in NAD+ as we age, and that supplementing for this loss of NAD+ improves memory in animals with Alzheimer’s disease – if the same works for human patients then a valuable treatment against Alzheimer’s disease could be close at hand. Fang’s group has been working on this project for 5 years, recently publishing an extensive report in the journal Nature Neuroscience (12 Feb. 2019), and publishing an article through VG – referring to the possibility of an NAD+ “miracle pill” – earlier this winter.

On the other hand, if lifestyle changes or pills aren’t your thing, maybe try something from science fiction. What if there was some sort of cure? What if we could treat the symptoms of ageing as they arise? Aubrey de Grey flew in from California to speak on this, though if he was jet lagged it wasn't visible.

He talked about how we define and treat the entire concept of ageing and its relation to disease. When we get ill today we attack the individual problem. A bacterial infection is treated with antibiotic and kidney stones can be destroyed by soundwaves. We should look at the many causes of ageing and attack those. Earlier we described how byproducts from producing energy can harm our cells. De Grey wants to find treatments for this problem. De Grey and the SENS Foundation he represents are often characterized as aiming to extend human life indefinitely, but de Grey took great effort to emphasize that they want to keep people healthy, and that living longer is only a positive side effect.

The evening session at Litteraturhuset was a success. A mixed audience of both young and aged people filled the Amalie Skram auditorium. Pål Barkvoll, Dean of Dentistry, UiO, introduced the evening, highlighting the importance of the theme and the often-overlooked fact that oral health is important aspect of healthy ageing. The audience seemed to enjoy the talks, which featured light presentations and ended with a roundtable discussion moderated by Sigrid Bratlie. The panelists were Aubrey de Grey, Jan Hoijmakers, Linda H. Bergersen, Hilde L. Nilsen, Lene J. Rasmussen, Jon Storm-Mathisen and Ruben Gudmundsrud. Topics included fasting, societal effects, implications, and questions and comments from the audience were answered.

An interesting discussion involved the implications of increasing the functional, healthy part of our lives, let's say to 120 years. This would greatly extend the working portion of our lives. This poses many difficulties to our current retirement system, but due to improved health could allow us to take additional education and have a longer working life, or take part in more work for society, for example by volunteering for different activities post-retirement.

Where do we go from here?

Many countries already have a dedicated research centre for ageing, and NO-Age hopes to bring the same sort of innovation to Norway. Lene J. Rasmussen, a researcher from CEHA (the Center for Healthy Aging) in Copenhagen, presented on the opportunities afforded by a multidisciplinary approach to conducting research in ageing. CEHA is associated with the University of Copenhagen, and since its establishment has grown to have the support of the Danish government and major private funding from Nordea-fonden, recently renewed allowing them to continue research. We at NO-Age hope we can develop something similar here in Norway.