Another PhD from the deparment!

Rivan Sidaly has publicly defended her doctoral dissertation The role of hypoxia on the formation of dental enamel: a clinical, an experimental animal, and a cell study. Department of Biomaterials congratulates Rivan on her great achievement! 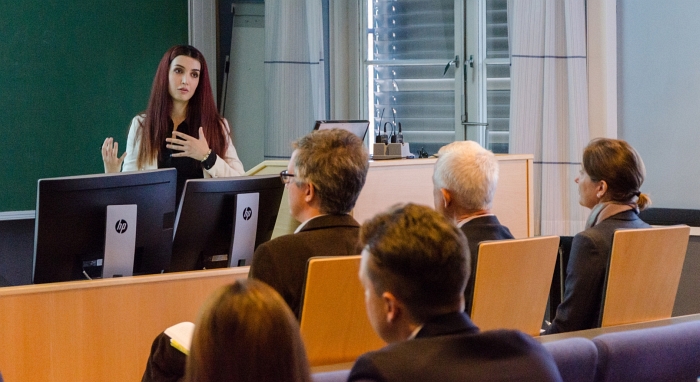 Dental enamel, the most highly mineralized structure in the human body, is formed within a unique, extracellular matrix derived through the synthesis and secretion of proteins by ameloblasts. Defects in tooth enamel can be caused by both genetic and environmental factors. One enamel defect of great clinical importance is molar incisor hypomineralization (MIH), which can be defined as a condition that involves local enamel hypomineralization affecting only first permanent molars and incisors. These are the only teeth undergoing amelogenesis at the time of birth. The condition is believed to be a consequence of one or more harmful factors that disrupt ameloblast function during enamel maturation around the time of birth. Hypoxia during labor may be one candidate factor that could cause enamel disturbances originating during or near the termination of gestation or during the early neonatal period. In this context, it is interesting to note that most published studies on MIH focus on other etiological factors and effect of hypoxia on ameloblast has so far not been thoroughly documented. The aims of the present series of studies were to assess the effect of hypoxia on the formation of dental enamel. In addition, the aim was to identify clinical and histological features and molecular mechanisms of MIH affected enamel teeth, and thus contribute to the knowledge about the aetiology of MIH.

Murine ameloblast-derived cells (LS-8 cells) were exposed to hypoxic conditions for various times and the cell viability, expression of structural enamel matrix genes, the secretion of cytokines and interleukins into the cell-culture medium was studied. Hypoxia increased expression of the structural enamel matrix genes; amelogenin (Amelx), ameloblastin (Ambn), and enamelin (Enam), as well as the enamel protease matrix metalloproteinase-20 (Mmp20). The secretion of several vascularization factors and pro-inflammatory factors was also increased after hypoxia exposure. This may indicate that enamel may be hypomineralized with higher protein content.

In an animal study, incisors from hypoxic mice were obtained 5 and 49 days after a hypoxic insult of 2 hours, and studied. Scanning electron microscopy analysis showed that the effect of hypoxia varied considerably among mice, among incisors, and also among cells (ameloblasts) within the same site. Affected enamel showed hypoplasia with hypomineralization or hypomineralization without hypoplasia. Vascular endothelial growth factor (VEGF) was enhanced after hypoxic exposure compared to controls.

In a cross sectional, case-control study, based on clinical and photographic examinations of 8-10 year old children, a possible association between Apgar ≤ 5 at 5 min and the occurrence of MIH was examined. The prevalence of MIH did, however, not differ between the two groups. In addition, there was no statistically significant relationship between the number of affected first permanent molars in cases and controls.

While our studies in LS8 cells and murine incisor enamel offer insight to mechanisms, further efforts should be made to find tools and methods enabling a closer insight into the hypoxic effects on tooth enamel. Additional evidence, from large and prospective clinical trials, is required before drawing conclusions.