Sigrid Haugen successfully defended her dissertation for the degree of Ph.D. (philosophiae doctor) : A study of adiponectin and adiponectin receptor agonist ADP355 on bone and orthodontic tooth movement. 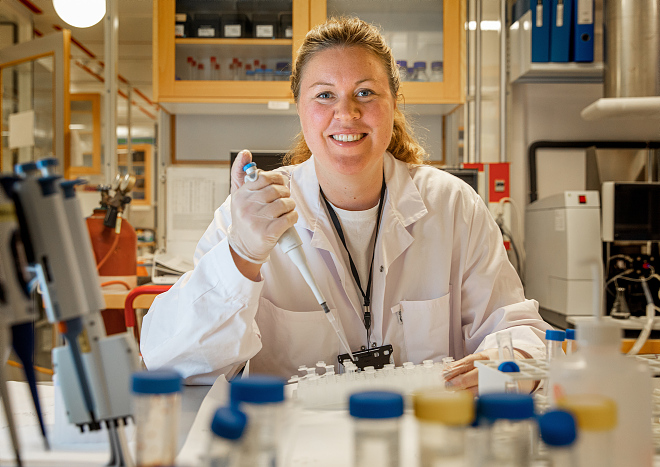 Sigrid Haugen's dissertation shows the effect of adiponectin and adiponectin's receptor agonist ADP355 on bone cells and bones, and that local injection of adiponectin can affect orthodontic tooth transfer and was successfully defended on September 11th.

In a treatment strategy, a peptide would be advantageous to use over a large complex protein, and therefore the effect of ADP355 was analyzed. ADP355 has been shown to bind the same receptor as adiponectin, AdiopR1, but the effect of ADP355 and adiponectin was not similar in primary human osteoblasts. ADP355 produced less differentiation of the osteoblasts compared to adiponectin. Furthermore, our data showed that adiponectin decreased, while ADP355 increased the expression of AdipoR1 in primary human osteoblasts, which may explain why there was a different response to the cells. In addition, we observed donor variations in the levels of adiponectin receptors ( AdipoR1 and AdipoR2), and how these were affected by treatment with either peptide or protein. In a rat study, topical administration of adiponectin reduced experimental tooth displacement compared to control.