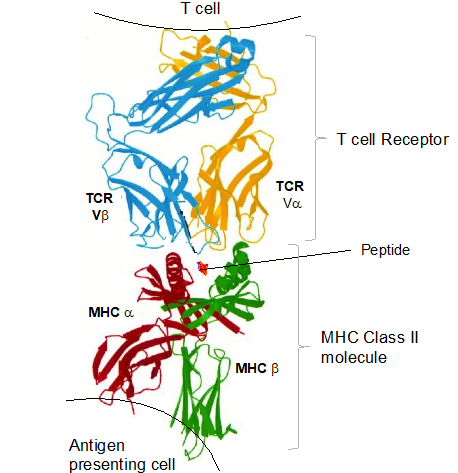 T cell receptors interact with MHC molecules with the peptide in the groove between the two alpha helices of the molecule. MHC of the humans are called Human Leukocyte Antigens or HLA, which are important for tissue transplantation too. Thus, the name - MHC derives from such a function – major histocompatibility complex (of proteins). (Histo = tissue, compatibility= ability to tolerate foreign tissue, or organ from another person). The TCR-MHC interactions are conserved in the evolution, and each species of higher animals has their own sets of alleles and preserved interactivities.

In the review it has been suggested that TCR-MHC “interacting ability conservation” is due to interaction of three specific regions on the interacting surfaces- as depicted on the Figure 2. The region on the TCR molecule called #tope3 (Fig.2c) is the only one predicted theoretically to be “free” to interact with foreign peptides (usually bacterial, viral or parasitic). This is important because via such a mechanism the adaptive immune system can recognize pathogens and protect us from infections.

Melvin Cohn, Colin C. Anderson, Zlatko Dembic. The case for allele‐specific recognition by the TCR. Scandinavian Journal of Immunology, 2019 May 25.