Understanding the DNA exchange process in the mitis group of streptococci

Researchers from the Institute of Oral Biology (IOB) have recently published a mini review article discussing how bacteria from the mitis group of streptococci benefit from natural transformation and why this mechanism is of great importance for them as a group. 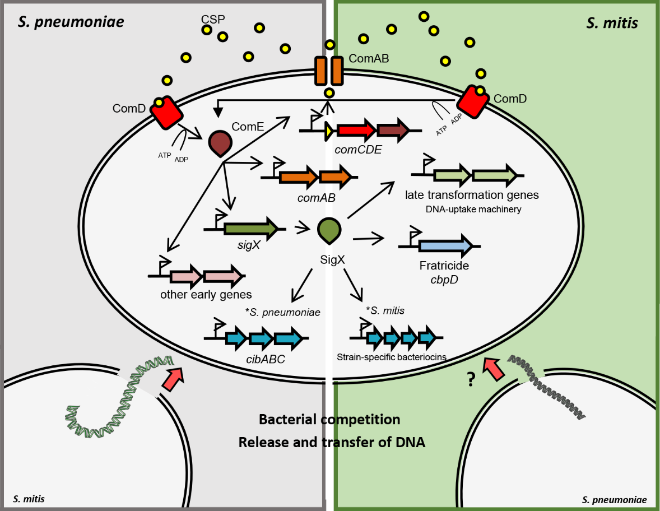 Imagine you could have the ability to, all of a sudden, acquire a new characteristic and have that assimilated into your genome. That is a very important characteristic of certain bacteria, and allow them to trade genes such as those related to resistance to antibiotics. This is a widespread characteristic of the genus Streptococcus, The mitis group of streptococci comprises species that colonize the nasal, oral and pharyngeal tracts of humans. S. pneumoniae and S. mitis are close relatives and share ~60–80% of orthologous genes, but still present striking differences in pathogenic potential towards their human hosts. S. mitis has long been recognized as a reservoir of antibiotic resistance genes for S. pneumoniae, as well as a source for variation of capsule, leading to resistance and escape to vaccines. Both species share the ability to become naturally competent, and in this context, the authors discuss how the similarities and differences in their systems can play important roles in gene exchange between these species. Ultimately, the article touches upon the fundamental clinical and evolutionary implications of S. mitis and S. pneumoniae sharing similar competence systems and a large fraction of their genomic DNA.

Prof. Fernanda Petersen and postdocs Gabriela Salvadori and Roger Junges were joined by Prof. Donald Morrison from the University of Illinois at Chicago (UIC) during the conceptualization and writing of this work.  This collaboration is a part of the INTPART program, which aims to enhance world-class research and education in biofilm and antibiotic resistance. You can read more about INTPART here.