An artificial molecule can impair the E.coli-bacteria’s aptitude to cause illness. This may have wider impact than solely for the illnesses this bacteria causes. The discovery may also prove a valuable contribution in the struggle against the increasing threat from antibiotics resistance. 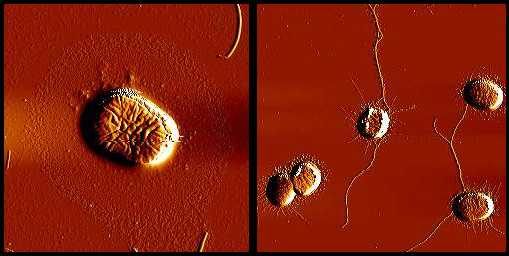 TheE. coli-bacteria have genes that code for filamental structures, making it easier for the bacteria to attaching to surfaces. To the left, we see an E. coli- bacterium to which Thiophenone has been added. We can see that the threads are missing. To comparison, we see the bacteria to which Thiophenone has not been added to the right, and these bacteria have produced threads "as normal". Photo: Ida Hegna, School of Pharmacy, UiO.

The E.coli-bacteria are both a blessing and a curse for the human body. They are present in everyone of us, as they also are in all mammals. They are specifically present in the colon where they hold an important function in the digestive process. Still, many associate the bacteria, or Escherichia coli, which is the full name, negatively. The reason is that some variants of the E. coli produce poison – that the animals are immune to but that can be destructive to us humans, and in the worst cases have fatal consequences.

May lead to grave illness

Even though E. coli assist us in digesting the food we eat, things can go terribly wrong if we bring in one of the poisonous variants. It can cause intestinal infections with bloody diarrhea and intense pain, urinary tract infection, blood poisoning or renal insufficiency. Children, older people and those who have reduced immune defense are especially vulnerable to the grave outcome, and in some instances, the bacteria has had a lethal end for those infected.

The damage begins in the biofilm

If we turn to a microscopic level, E.coli does not turn pathogenic before a number of the bacteria gather and then group together in what we call a biofilm. – In order to group into a biofilm the bacteria need to talk to each other, explains ph.d.-candidate Ingun Lund Witsø from The Faculty of Dentistry at the University of Oslo (UiO). She is about to close up her ph.d.-project where she is investigating ways to reduce the potential of the E.coli-bacteria to cause harm. – The bacteria send hormone messengers in between themselves, that is how they communicate. When they gather in a biofilm, they are agglomerating into a pulp. This pulp protects them and makes them resistant towards medications and our immune defense.  But if we disturb the communication of the bacteria we obstruct their ability to form a biofilm. In that sense, we reduce the potential to cause harm and the risk of bringing about illness.

The ph.d.-project of Witsø's main focuse has been to test how two synthetic molecules, Furanone F202 and Thiophenone TF101, impact the E.coli-bacteria. Based on the structure of the Furanone-molecule, deveoped from the alga Delisea Pulchra, professor and main supervisor Anne Aamdal Scheie and professor Tore Benneche have had the idea of producing and investigating Thiophenone-molecules. These molecules are unique and are being created at the Department of Chemistry at UiO. The effect of Thiophenone on E. coli has never before been investigated.

What Witsø found was that Thiophenone disturbs the communication between the bacteria in a highly effective way: – When the way in which the E.coli-bacteria communicate is disturbed, the pattern of how they act is also ruptured. Neither can they attach to the cells of the intestine nor can they create biofilm, she says. When the bacteria do not create biofilm, their ability to cause illness is also impaired.

Increasingly more bacteria are developing resistancy against antibiotics, which has been referred to as one of the largest threats towards the global health system.– Antibiotic resistance is threatening the totality of Western medicine, thinks Morten Lindbæk, the leader of the Antibiotic Center for Primary Care, according to Norwegian newspaper VG. In Europe, an estimated 25 000 people already die each year from resistant or multirestistant bacteria.

– Unless we find alternative solutions, it is just a matter of time before we no longer have efficacious antibiotics. To attack the communication of the bacteria may prove to be a new method of combating dangerous, resistant bacteria, thinks Witsø.  – Substances that disturb the communication between the bacteria, without killing them, reduce  the risk of the bacteria developing resistance. That is the reason why substances like Thiophenone can be advantageous in the battle against antibiotic resistancy.

Other areas of utilization

The research on the communication patterns and how the bacteria behave, is yet on a basic research stage. – But one could imagine that such an artificial molecule, holding the characteristics of Thiophenone, could be added to mouthwash in the future, says Witsø. The substance may potentially contribute in loosening up dental plaque more efficiently.

Other imaginable areas of utilization could be to add the substance to disinfectants or as an additional medication to regular antibiotics. The protected bacteria in a biofilm are less likely to react to such remedies, but the addition of Thiophenone could counter that. Since biofilm is a frequent cause of infections in implants, you could also imagine that the substance could be attached physically to certain prostheses to reduce and prevent the forming of biofilm. In a similar way, Thiophenone may receive a function in the industrial field. You can picture the substance as a useful measure to combat problems with biofilm in places like oil pipes, the underbody of boats, cooling towers, and different types of machines and installations.