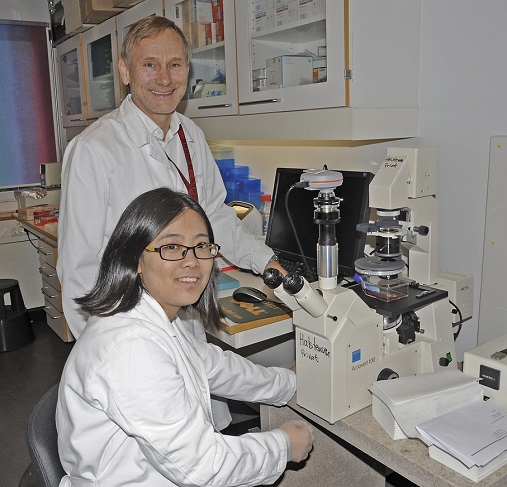 In Norway, more and more people are being affected by cancer of the mouth and throat. In recent years, the incidence has increased but the mortality has remained the same.  Cisplatin is one of the most commonly administered cytostatics for this patient group. At the start of treatment, the drug works well. Gradually, though, most patients experience that the tumour develops resistance against this drug and the prognosis for survival then becomes very poor.

In her PhD thesis, Jian Gao wanted to find out how the cancer cells could protect themselves against this cytostatic i.e. what is the underlying mechanism of resistance.

She therefore cultured various cancer cell lines derived from oral cavity  which were given differing doses of the cytostatic cisplatin.  A cancer cell line is cultured from patients' cancerous tumours and can live indefinitely in the laboratory. These types of cell lines are used to examine the biology and the changes that have resulted in the development of cancer. Because the cancer cell lines divide in the laboratory, they can also adapt to new growth conditions, for example by becoming resistant to the cytostatic cisplatin in the same way as the cancer tissue in the patients.

"First, I had to find those cancer cells that were sensitive to the cytostatic," explains Jian Gao. By identifying the sensitive cancer cell lines that I could make resistant in the laboratory, I could then study which changes took place in the cells as they changed from being sensitive to being resistant, " clarifies Gao.

"During this process I found two different cancer cell lines. At the beginning, I gave them a dose of cytostatic that was strong enough to kill half of the cancer cells. This dose was increased each week, and after eight months both types of cancer cells were resistant to the cytostatic, cisplatin, " explains Gao.

Next, these cells had a resting period  from any type of treatment. Gao wanted to see whether this resistance could be reversed by the pause in cytostatic treatment. However, it became apparent that the pause did not have any effect and the cells were permanently resistant to cisplatin. The resistant cell lines had changed permanently.

"Since I have two cell types  that I knew were resistant, and I could now compare these cell lines with the original sensitive cancer cell lines," comments Gao.

Only three genes were found to be up-regulated in both of the resistant cell lines. Of these genes, Gao decided to look at a cytokin, interleukin 6 (IL-6), which is a signal molecule that is often up-regulated in cancer, and which is associated with a poor prognosis and cisplatin resistance in several types of cancer.

By investigating expression of the IL-6 gene in head and throat cancers in 399 patients and then comparing this with survival, Gao and her co-workers found that, after treatment with the cytostatic cisplatin, the patients with cancer tumours with the up-regulated interleukin 6 gene did not have a better prognosis for survival.

Apparently, such cancer tumours were resistant to cisplatin.  However, detailed mapping of the resistant cancer cell lines revealed that IL-6 in itself did not make the cancer cisplatin resistant.  The effect had to be exerted via currently unknown mechanisms, possibly in the interaction between the cancer and IL-6 stimulation in the surrounding connective tissue.

Jian Gao's research showed that if these growth factors were up-regulated, there was a high probability that the patient would not survive. At the same time, no relationship was found between cisplatin resistance in the cancer cell lines and the production of these growth factors.

However, the researchers could demonstrate that the more of these four growth factors a tumour expressed, the poorer the prognosis for the patient. By quantifying the amount of mRNA in the tumour tissue, Gao and co-workers could predict the patient's prognosis considerably more accurately than the TNM system, which is the traditional method used to determine the stage of a cancer.  The level of these four growth factors could predict how long even the most ill patients with distant metastases would live.

These growth factors have a common receptor in the so-called EGF receptor family.  Currently, there are a number of drugs in use in patient treatment that can block this receptor. For patients whose cancers demonstrate high expression of these growth factors, it could potentially be particularly appropriate to use these medicines to reduce the growth of the cancer and increase the patient's chances of survival.

In the last part of her PhD thesis, Gao tried to find the various "inhibitors" that could affect cisplatin resistance. After several trials with various signal and receptor inhibitors, she finally found that a drug called AG825, which inhibits the activity of an EGF receptor family member (HER 2), could reduce cisplatin resistance in four different cancer cell lines. This occurred by increasing the ability of cisplatin to trigger the cells' self-destruct programme (apoptosis).

These drugs are already in use to treat patients with other types of cancer and, even though the details of the mechanism must be investigated in more detail, Gao and co-workers have demonstrated the probability that treatment with a cytostatic combined with "inhibitors" of the cancer cells' protective mechanism will be advantageous.  This could considerably improve the effect of the cytostatic cisplatin and thereby improve the prognosis for survival for patients with cancer of the head or throat.

But a lot of work still remains, and the journey from cell line reactions in the laboratory to how cancer cells in patients react to the same type of combined therapy is often long. Only more research can provide the answer to whether this is a navigable route to a more effective, personalised treatment of cancer of the head and throat.