Senses of taste and smell more important than we think

Research smell and taste is a relatively new field in Norway, but Postdoctoral Fellow Preet Bano Singh at the Faculty of Dentistry is breaking new ground in this area. 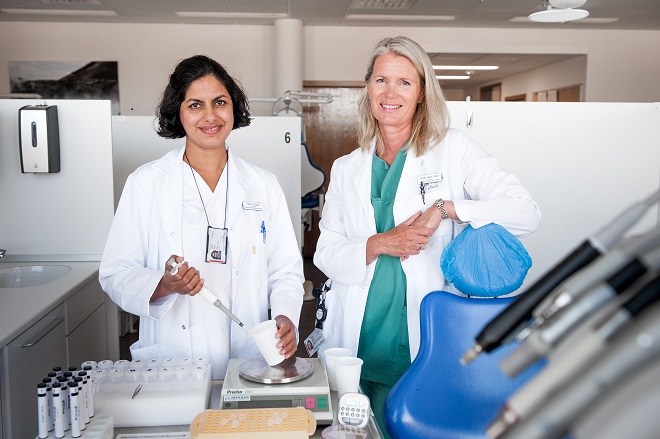 Humans have five senses: sight, hearing, smell, taste and touch. In modern neurology, knowledge of the classical senses, especially sight and hearing, has played an important role in understanding how the brain interprets sensory impressions. The senses of smell and taste, on the other hand, have received little attention.

“And that is really quite surprising,” says Dr Singh, “especially in the light of a current discussion about how the sense of taste is possibly the only one of the five classical senses that for humans is actually essential to life.

If the sense of taste is impaired, it may often negatively affect patient’s food intake, nutritional status and consequently health condition.. Senses of smell and taste are vital in identification of valuable nutrients in the environment, procurement of adequate energy and central to survival. That is an important reason why research into taste and smell should receive just as much attention as the other senses,” says Dr Singh.

Her research at the Faculty of Dentistry shows how smell and taste affect areas like behaviour, neurology, cancer and rheumatic diseases. Last, but not least, it shows the importance to dentists of basic and clinical research in smell and taste.

In 2004, Richard Axel and Linda B. Buck received the Nobel Prize in Physiology or Medicine for their work on how the olfactory system in the brain functions.

New links were revealed by studying patients with Sjögren’s syndrome.

Among patients who have problems with smell and taste are those with Sjögren’s syndrome. At the Dry Mouth Clinic, Dr Singh and her colleagues investigated disturbances in smell and taste in this group of patients in a study published in the European Journal of Oral Sciences.

“Something this research shows,” says Dr Singh, “, is that besides reduced saliva and a high risk of caries, these patients have impaired senses of smell and taste.”  It is manifested in some very uncomfortable side effects. The patients reported of (i) reduced sense of smell and taste, (ii) distorted smell and taste and (iii) burning sensations in the tongue

Additionally, a high frequency of bad breath was also reported in this group. For a large number, quality of life is seriously affected.

“Since little is known about these symptoms , patients often feel that they are brushed aside, and their problems regarded as trivial,” explains Dr Singh. Nevertheless, pathology was observed  in the pain cortex  in brain scans of patients with burning mouth syndrome. This was reported in the European Journal of Neuroscience.

“It was important documentation for the patients and others that the pain they felt was real, and it also showed that more research is needed in this area,” Dr Singh continued.

Neuroanatomy of the sense of taste

Dentists may encounter patients who complain about one-sided disturbances in the sense of taste, meaning that the patient describes changes in taste on the right or the left side of the tongue. The symptoms may be caused by underlying disease, but they may also be a consequence of dental treatment. In an article in NeuroImage Dr Singh has contributed to the clarification of which nerve paths are followed by the perception of taste from the taste buds in the mouth to the insular cortex of the brain.

“This knowledge is important to enable dentists to diagnose and treat disturbances in the sense of taste,” says Dr Singh.

In collaboration with Associate Professor Pia Titterud Sunde at the Section of Endodontics, Dr Singh is in the process of mapping out whether there is a connection between root canal treatment and taste disturbances . The work also involves master students at the faculty.

The sense of smell is closely linked with the part of the brain concerned with memory. Most people have experienced how a particular smell can bring back a childhood memory, or perhaps remind of a person who is no longer alive. But are we able to smell other things as well, such as fear and anxiety? If we can, how does it affect the way we regard others who are afraid?

Dr Singh*s  work answers this question, especially from the dental point of view. Can the body odors from a nervous patient affect the way the dentist works? By examining this question Dr Singh hopes to show a connection between practical clinical dentistry and neurology.

But what is it that affects us in a smell? The answer is odorants.

Odorants are chemical substances in a volatile form that bind themselves to the olfactory cells in the nose and are registered by the brain as a particular smell. Odorants can make us behave in particular ways, which a study at the faculty helped to demonstrate.

A research project was carried out at the Dentistry Skills Center to see what happens when dentists treat patients who are anxious or nervous. The trial was conducted using T-shirts with body odors from two situations, one in which the bearers were nervous, and one when they were relaxed. The shirts were then placed on practice dummies while students performed dental treatments. Clean T-shirts with no smell were used as controls. All the T-shirts were masked with a substance called eugenol, so that it was not possible for the students to distinguish which smell was in which T-shirt.

The students were then asked to perform the treatment the normal way. The results showed that the dummies wearing T-shirts that smelled of fear were given poorer treatment.

“The results of this study show how important it is to know about this mechanism,” says Dr Singh. “If dentists are aware of how a nervous patient in the chair can affect them subconsciously, they can make use of that knowledge and take extra care.”

The project was carried out in collaboration with the University of Trieste (SISSA) in Italy and involves Master students at the faculty. The study was published in Chemical Senses.

Children and the sense of smell

Some children are born without a sense of smell, or lose their sense of smell during childhood, as a result of serious underlying disease such as cancer. There is at present no established method of testing the sense of smell in children. However, clinical research is being carried out at the children’s department of the faculty.

Dr Singh and Associate Professor Ingvild Brusevold are working on the validation of a test, developed at the Technische Universität Dresden, to identify the sense of smell in children. This new test is currently being validated in twenty countries, and Dr Singh is responsible for its validation with Norwegian children.

Dr Singh is also interested in exploring how the senses of taste and smell are affected in patients with cancer. She is involved in two different studies with cancer patients. One is in collaboration with New York University (NYU), at the Department of Oral & Maxillofacial Surgery, and the other is at the surgical department at the Faculty of Dentistry and the Norwegian Radium Hospital.

“At NYU we are investigating the occurrences of disturbed sense of taste in patients with oral cavity cancer. At the surgical department, in collaboration with Professor Bente Brokstad Herlofson, we are investigating the occurrence of disturbed sense of taste and smell in cancer survivors,” explains Dr Singh.

In other areas too, it will be useful to extend the knowledge of changes in the senses of taste and smell in the oral cavity. Could changes in taste indicate other underlying serious illnesses, for example?

Dr Singh described a patient who was referred to her complaining of altered taste on one side of her mouth. The woman was healthy and working full time. Some time previously, a root filling had been treated in the right side of her mouth. Immediately after the root filling treatment, she began to complain of a metallic taste from the right side of her tongue. The root filling specialist thought it must be due to the root filling, and re-filled it, but the patient still complained about the changes in the sense of taste. The dentist decided to remove the amalgam fillings in the neighbouring teeth, hoping it would help, but it still did not have the desired effect. The patient was then referred to Dr Singh for further diagnosis. When Dr Singh examined the patient, she discovered that in addition to the metallic taste, the patient was numb on the right side.

“This made me think that it was not simply a case of damage to the taste nerves, but that there must be some other cause as well. I suspected that there might be damage to two nerve threads, the buccal nerve and the chorda tympani, and that the problem might be in the middle ear. I referred the patient to an ear, nose and throat specialist, who discovered that she had a tumour in her ear.”

The expanding role of the dentist

More research and greater knowledge about taste and smell can provide important insights for many different groups of patients.

“There are specialists in ophthamology  and in otorhinolaryngology , but so far none in taste and smell. Dentists specialise already in the oral cavity, so it would be natural for dentists to play an active role in extending our knowledge of smell and taste,” says Dr Singh. In other countries, Germany and the USA, for example, there are taste and smell centres where patients can be referred. They do not exist in Norway yet, but we should have them, and here dentists would be the natural choice as specialists,” concludes Dr Singh.