- Never seen this much snow!

Days a little out of the ordinary are soon coming to an end for the dental student Leonardo Pagotto. Since the beginning of the year, the 22-year old Brazilian has been an exchange student in the lab of the Faculty of Dentistry in Oslo. 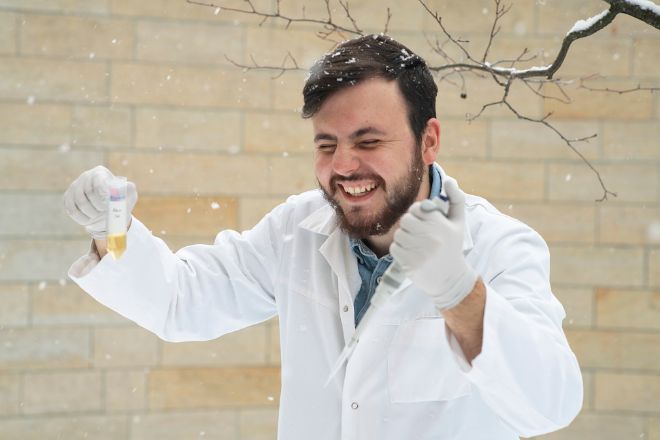 Leonardo Pagotto from Brazil has been in Oslo since January, as an exchange student at the Faculty of Dentistry. Photo: Fredrik Pedersen, OD/UiO

- It is a completely new experience for me, and I recommend student exchange to everyone who has the opportunity, says Leonardo enthusiastically, in his steady English. His stay in Norway is coming to an end on February 28. He brings back the adventures and new knowledge he has acquired at the University of Oslo to the Piracicaba Dental School of University of Campinas (FOP-UNICAMP), an hour and a half north of Sao Paulo city, Brazil.

Leonardo is an undergraduate student at FOP-UNICAMP, and besides studying to be a dentist, he develops research in the biochemistry lab. At the lab in the Gaustad part of campus, he works closely with Prof. Fernanda Petersen’s research group, investigating Chlorhexidine: a type of antimicrobial commonly used in clinical dentistry to chemically control dental plaque (biofilm) formation. Among other things, Chlorhexidine is used mouthwashes, gels and varnishes. In the research project, Leonardo is examining whether Chlorhexidine can provide antibiotic resistance to the bacterial cell, and in case, how.

The project has been developed in a collaboration between the Graduate Program in Dentistry, Cariology area, at FOP-UNICAMP and the Faculty of Dentistry at the University of Oslo. Leonardo explains that they have received mixed results this far: – We investigated the consistency of the activation of resistance genes in the first part of the project. The next part examines the bacterial transformation - the ability of the bacteria to take up DNA from outside of the cell and bind it to its own DNA - to conclude whether Chlorhexidine use may contribute to antibiotic resistance. The results so far seem to indicate that Chlorhexidine reduces the expression of genes related to antibiotic resistance, and also that it reduces bacterial transformation.

Oslo has made a good impression

He has experienced a capital wrapped in various winter coatings since he arrived. Still, Leonardo has adjusted quickly and he likes Oslo a lot, better than he expected. – The weather wasn’t all that good during  my first week but it got a lot better after. But I have never seen this much snow before, he says with a smile.

He is staying at the Sogn student village housing and has spent time exploring the city during the weekends. Among the places he has visited was Frognerseteren viewpoint after one of the snowiest days this year. Yet, Leonardo has not tried skis: – But I saw someone trying it at Frognerseteren! It could have been fun to try, he thinks. Other than that, Aker Brygge is another place in Oslo that has made the biggest impression on the Brazilian: – It has a lovely view and a beautiful sight of the sunset, he says.

Leonardo’s exchange is not part of the Faculty’s «ordinary» Erasmus-program. He had the opportunity to go to Oslo through the Resispart exchange project. The project belongs to Professor Fernanda Petersen’s group and is financed through the INTPART-program, aimed at developing top research through international collaboration.

Towards the end of the year another student might travel from FOP-UNICAMP to do an exchange in Oslo. In addition, two junior researchers from Oslo, Roger Junges and Gabriela Salvadori, will travel to the University of Illinois at Chicago for a research stay this summer, through the same collaboration.

Upon his return to Brazil in March, Leonardo is going to resume his undergraduate studies. – When I get back, there is only clinical training left of my studies. Leonardo adds that he would like to go on to pursue master and doctorate degrees.
Before anything else, however, he is going to have a week off when he gets back to Brazil. – It’s time for carnival, he says with a smile.

The differences between Brazil and Norway are obvious. And even though Leonardo is clear on that adjusting to the high prices in Norway has been a bit hard, especially the prices of food, he is still not in doubt when recommending students to do an exchange.  – Don’t be afraid to go! If you get the opportunity, you should definitely take it. It is a great chance to experience something totally different!