The dark side of Antibiotics: Adverse effects on the infant immune defense against infection

An interesting and informative article published in the journal - Frontiers in Pediatrics - shines light on how antibiotics alter the immune system of infant babies and render them susceptible to infections in later life. 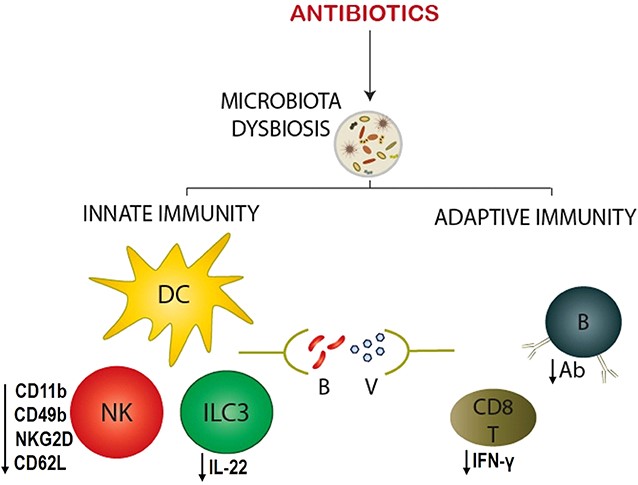 Human infants - especially underweight and preterm - are vulnerable to infections, and so receive frequent antibiotic treatments for the prevention and control of infections. Although therapeutic antibiotic regimens have been effective in reducing infant morbidity and mortality ensued due to bacterial infection, there are unintended collateral damages that antibiotics exert on the immune system and friendly microbes of infants. Antibiotics disturb the infant microbial ecosystem, which in turn alters immune defense against several diseases, including infections. These antibiotic effects are more pronounced in infants than adults because the microbial ecosystem and immune system are unstable and immature in the former.

Recent studies in human and animal infants suggest that antibiotics perturb the ecosystem of friendly microbes - often referred to as dysbiosis - giving rise to enhanced host susceptibility to bacterial and viral infections in later life.

Antibiotic-driven dysbiosis profoundly influences the innate and adaptive immunity of infants. The exposures of antibiotics alter the phenotype and function of innate immune cells - such as dendritic, natural killer, and innate lymphoid cells - which significantly control the outcome of infectious diseases. Furthermore, antibiotics can modulate the adaptive immune components - antibodies and T cells - which are crucial for long-lasting immunity that provides protection against pathogens. Early life treatment with antibiotics impairs antibody (IgG) responses that play an important role in the generation of protective immunity to vaccines. On the other hand, T cells, particularly CD8 + T cells, from the infants exposed to antibiotics reflect functional aberrations in response to bacterial and viral infections. Cumulatively, these findings suggest an important role for antibiotics in altering the infant immune function and may have implications for designing better strategies for the prevention and treatment of infectious diseases.

The Dark Side of Antibiotics: Adverse Effects on the Infant Immune Defense against Infection